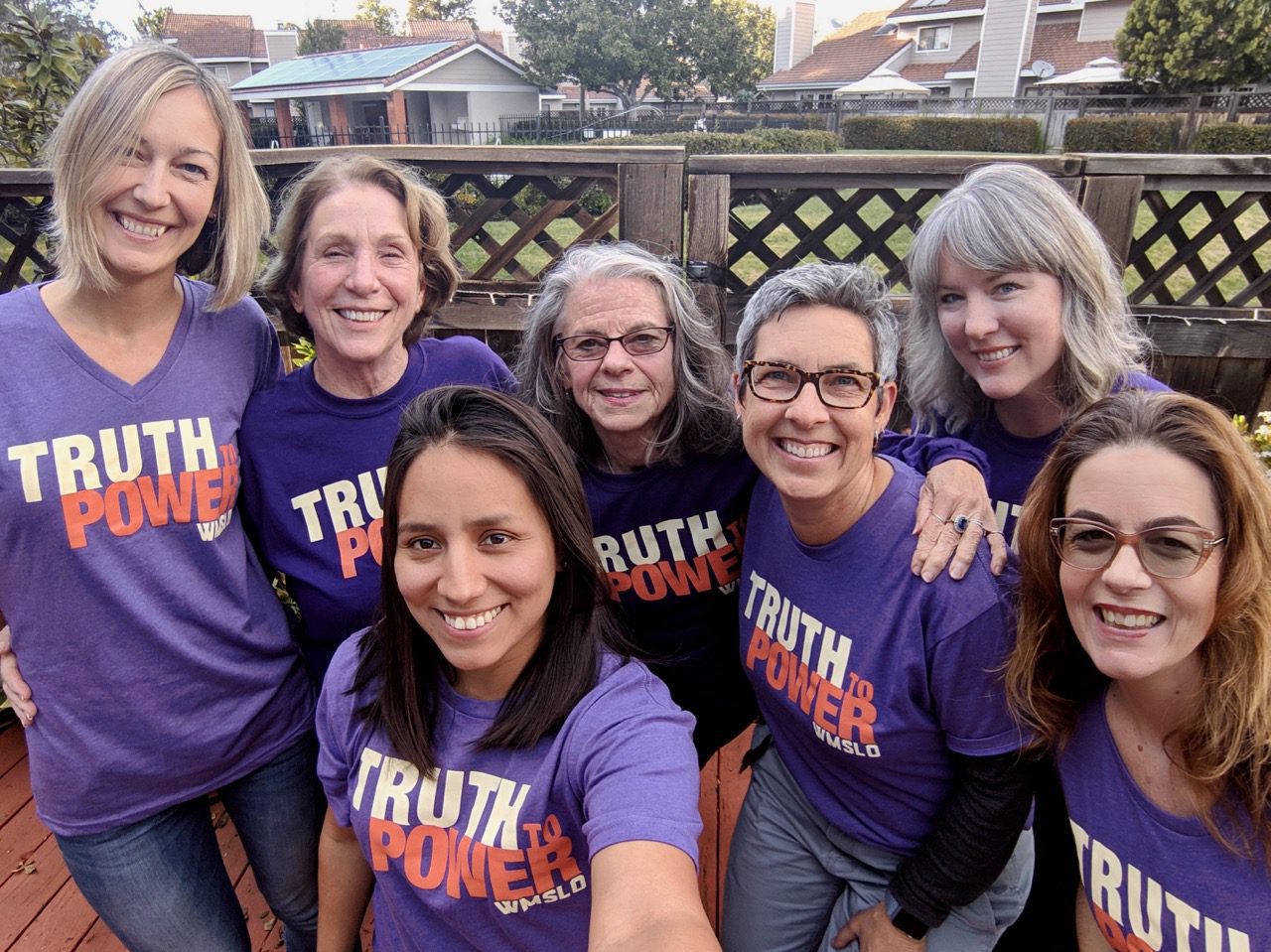 Who are the Women’s March SLO Leaders?

Dawn Addis co-founded Women’s March San Luis Obispo in November 2016. Along with millions of others worldwide, she decided to get off the sidelines in defense of women’s rights, human rights, social and environmental justice, and civil liberties. Due to her community focused action, in 2017 she was named “Woman of the Year” for the 24th Congressional District. In 2018, Dawn was the 24th Congressional District Guest to the State of the Union address. Dawn has been a speaker at every annual Women’s March SLO event. She is excited for the change that the American people will create in 2020 and beyond.

Jen Ford co-founded Women’s March San Luis Obispo in 2016, simultaneously with millions of others around the world. At that time, she was a teacher who felt inspired to take action to insure a better future for not only her young students, but also for her own daughters. Jen has continued to co-organize with WMSLO over the years,  using her background in event planning and marketing. She believes that hope for change is what moves her forward and that fighting for equal human rights is crucial.

Pat Harris is a life long activist for feminist causes and joining the other dedicated women to create the first Women’s March in San Luis Obispo was a natural fit for her. Seeking some way to alleviate the despair she felt after the 2016 election, Pat offered her experience as an event planner to the group and immediately became part of this great adventure. She works with the City of SLO in parking and traffic control (a non-glamorous but very necessary part of the event) and she coordinates the more than 100 volunteers needed to make the event run smoothly and safely.

Terry Parry joined the WMSLO organizers team in 2016 to plan the first Women’s March and Rally held on January 21, 2017. Instead of going to Washington, D.C. for the national Women’s March, she found that for her it was most important to organize a march right here in San Luis Obispo. Every year, Terry produces and directs the pre-march rally. She feels this event builds community, insipires hope, and deepens commitment to our democracy. Additionally, Ms. Parry finds great satisfaction in her work with the WMSLO Student Activist Grant Program. This program awards financial support to students who are engaged in projects which align with the WMSLO Unity Principles. Supporting these budding activists is very energizing and hopeful as it points to a better future for all.

Andrea Chmelik grew up in communist Czechoslovakia, a country that no longer exists. Bearing witness to changing regimes, and both the rise and crumbling of democracy, she is passionate about social activism and community engagement. The 2016 presidential election was the first one she was able to participate in as a US citizen. As a content creator and communications lead for WMSLO, Andrea crafts messaging that empowers women, amplifies diverse voices and builds a community of tolerance and empathy, while encouraging positive and peaceful action. She believes in the power of storytelling, embraces humor, and remains an optimist at heart.

Rita Casaverde was born and raised in Peru. She is a product of her culture, her ancestors, and the numerous strong women in her life. Rita’s activist background began by helping communities in the Andes of Peru preserve endemic ecosystems. In 2011 this work led her to be recognized by the United Nations Environmental Programme with a Youth and Green Economy awards. Randomness, curiosity and love brought her to California’s Central Coast in 2012. Rita’s activism accelerated in 2016 when she and her Latin-American friends started experiencing bold acts of racism triggered by racist political rhetoric. In the last couple of years, Rita was trained by Al Gore as a Climate Reality Leader, joined WMSLO as an organizer, and is an active member of different community groups aligned to push our country towards a more equitable future.

Gail Bunting anticipated an election where the country would elect the first United States woman President. She marched on January 21, 2017 with millions of women around the world in a show of visual solidarity and worldwide sisterhood. Gail continues to organize and march today because it is a visual representation of our Democracy – the right to gather, unite and advocate for justice. This collective action brings synergy and reaffirms that we are not alone in our desire for a better future for ourselves, our families and our friends.