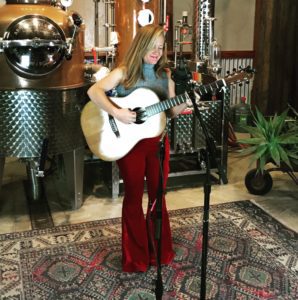 Leo Matthews is a folk singer-songwriter born and raised in the San Francisco Bay Area, currently residing on the Central Coast of California. She can often be found playing shows around the county with her band, Miss Leo & Her Bluegrass Boys. During the workweek, Leo works full-time for the nonprofit organization, Outside Now. She graduated from UC Santa Cruz in 2011 with a bachelor degree in Spanish Language Studies. In 2016, she obtained a Multiple Subjects Teaching Credential from Cal Poly.

Her songwriting tells stories from her life experiences with words and melodies that have the power to connect emotionally with all who listen. In her music you can hear influences from classic songwriters of the 60’s and 70’s meddled with traditional bluegrass and modern folk sounds. Her powerful voice has been described as angelic, mesmerizing, and likened to a combination of Joni Mitchell, Bonnie Raitt, and June Carter. Purposefully minimalist, Leo writes catchy and creative folk songs with lyrics that draw straight from the heart.​

Through her work at Outside Now, Leo devotes her time to connecting young children with the natural world at an outdoor classroom. Outside Now is a local education provider that fosters holistic human development through nature connection education and mentor relationships. Leo is a credentialed teacher who feels passionately about nurturing a happy and healthy future generation. She is glad to spend her days working with young children in nature. Leo spends much of her free time either at the beach, doing yoga, or playing music.